Your Texas Minute ~ The State Plant of Texas 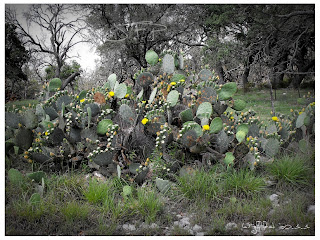 The prickly pear cactus was designated the official plant symbol of Texas in 1995. Found in the deserts of the American southwest, the fruits of most prickly pear cacti are edible, and have been a source of food to native Americans for thousands of years. Cacti in general (and the fruits in particular) are still staple foods for some residents of Mexico and Latin America and the prickly pear cactus is raised commercially. The fruit is sold under the name "Tuna"; the branches or pads are eaten as a vegetable, called "nopalito" or "nopales."
The name cactus is derived from the Greek word "kaktos", which means prickly plant. Cacti and other succulents face a variety of threats in their natural environment. They are easily propagated from seeds and cuttings, so removing plants from their natural habitat is uneccessary and harmful to the delicate desert ecosystem.
Posted by Admin at 4:36 PM