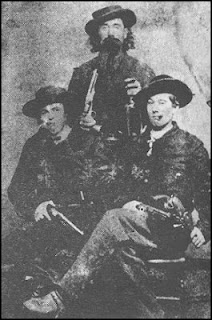 Partisan leader promoted
On this day in 1864, celebrated Confederate partisan Adam Rankin (Stovepipe) Johnson was promoted to the rank of brigadier general. Johnson was born in Henderson, Kentucky, and moved to Texas in 1854. There he gained a reputation as the surveyor of much virgin territory in West Texas, as an Indian fighter, and as a stage driver for the Butterfield Overland Mail. With the outbreak of the Civil War Johnson returned to Kentucky and enlisted as a scout under Nathan Bedford Forrest. His subsequent exploits as commander of the Texas Partisan Rangers within the federal lines in Kentucky earned him a colonel's commission in August 1862 and a promotion to brigadier general in 1864. One of his most remarkable feats was the capture of Newburgh, Indiana, from a sizable Union garrison with only twelve men and two joints of stovepipe mounted on the running gear of an abandoned wagon. This episode won him his nickname. Johnson was blinded and captured at a skirmish at Grubb's Crossroads in August 1864. Upon his release he returned to Texas, where he lived for his remaining sixty years and founded the town of Marble Falls, "the blind man's town."
-----------------------------------------

posted by Jeff ~ 6.1.2011
Brought to you by Texas Online Radio and The Texas State Historical Association.