Stop calling me racist just because I disagree with policy!! ~ Opinion/Commentary


STOP CALLING ME RACIST JUST BECAUSE I DISAGREE WITH POLICY!!

As I've begun to post US/Texas v. Mexico border issues on Texas Online Radio, I've been getting a lot of "hate mail" from people stating that I'm a racist against the poor people trying to find a better life here in the United States. They go on to say that since I disagree with the administration's policies, it's a racially motivated undertone because our President is black.

Unfortunately, I'll probably catch a lot of flak for this opinion, but frankly I've had just about enough, and tired of being called a racist every time I bring up the issue of securing the borders, limiting benefits to those here illegally, and randomly checking individuals that fit the profile of enemies of the State. Yes, I said it, profiling.

Allow me to share with you my "Profiling" story;

Back in the early 80's I worked as a project manager for a major home builder in San Antonio. At that time, it was known that much of the labor used on the sites were illegal's from south of the border. You could almost set your watch to the time the raids on the job would take place. Thursday afternoons or early Friday mornings. First you'd see the dark gray chopper circle overhead then the vans and cars begin to show up blocking the entries to the development. People from everywhere would begin to scatter. Many would find an open home under construction, rush inside, lock the door and climb into the attic to hide. They knew the agents wouldn't randomly search locked units. Many times, an anonymous call would be placed by someone in the group to the INS (Immigration/Naturalization Service at the time) on Wednesday evening or Thursday morning. Yes, they called immigration on themselves. This ensured a trip to the border over the weekend, and they would be right back to work at some point Monday morning. 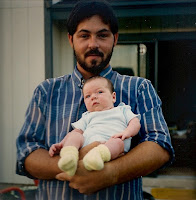 As the roundup ensued, everyone that was caught was lined up and asked for their "papers". There were many times I would get thrown into the mix as well simply because back then, I tanned darkly, and had a full head of black hair and a beard. They'd put me in line with the others, and I'd have to show proof of who I was as well. This was profiling, I understood it, and never made an issue out of it. I'd joke with the agents after showing them my "papers" that I was about as "White Boy" as you could get. Then going back to work without another word. I WAS profiled! Today, I could sue for that and probably win, but age has taken care of the boyish jet black hair and beard, and the only tan left is the "farmers tan" on my arms and face. Did I scream racism? NO! Did I scream profiling? NO! Did I run grab an attorney and sue someone? NO! It was just part of the job....and being who I was, and looking like I did.

It was a game, they knew they were doing wrong, breaking laws, and the employer turned the other cheek because it was cheap, good quality labor. They worked days, and went home nights, no trouble they just wanted the work. Now, it's evolved for many into a "how do I get there, and how much can I get" bringing burden and stress onto the economy like never seen before. The crime involved now is a whole other story.

These were not criminals so to speak, they were men here on a mission to work and provide for their families struggling back home in Mexico, Honduras, and other Central and South American countries. 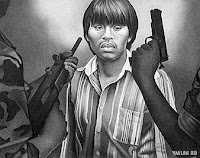 The death squads were rampant in Guatemala, poverty had stricken just about every part of the region. Escaping that, I can understand and sympathize with their motive. The goose that lays the golden egg is just to the north, if I can only get there many thought. No matter how they did it, they wanted to be here.

I had a thirteen year old kid that had made his way to the US, by himself, simply to escape the issues facing those back in his home country. He'd seen his entire family wiped out by the death squads, seeing his mother raped and his father and uncles decapitated. I could not imagine what that was like, but he was a good kid, great painter and all around handy man. He lived in a trailer house out south of San Antonio in cramped conditions with nearly twenty others in the same space. It was a fight each and every night just to find a place to sleep, a bite to eat. It all depended on what time your ride got you back to the property as to where you were in line for the night. The boy continued to work for over a year, he left one day, and I never saw him again. His fate unknown, where he went will always be a mystery.

I can understand a persons need to migrate for these types of reasons, but it needs to be done through the proper channels and legally. Now, we have the problems of the "narco-terrorism" that's going on in Mexico. Many are fleeing to the US for that reason. But again, that migration needs to be done legally and through proper channels. If the Mexican government falls to the cartels, there will be flood of refugees coming north that we will not be able to handle. It's something to consider now.

That gets me back to the concept of borders of a sovereign nation.

The borders between countries exist for a reason. Not only do they help identify the limits(borders), language and culture of a country, but they define the sovereign region in which the government of that country rule and lay down their laws. 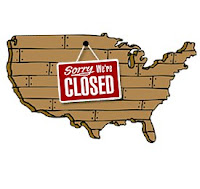 The borders of the United States have become so foggy, and so diluted with all the bureaucratic and political mess that it's difficult to tell who is right and who is wrong. Many see the US as some sort of "open area" that anyone can come to at any moment and have the same rights that were fought for in the many conflicts and wars this country has faced. Disregarding existing immigration policy and laws, simply stating that "I'm here, and I deserve to stay!". "If you deport me, it disrupts my family and my life, I'm being discriminated against, you're doing it only because I'm a foreigner, and you're racist for doing this...etc." are all comments heard when discussing the issue of immigration and securing the borders of our country. It's our right to have secure borders, and it's our governments duty and responsibility to protect and manage those borders, albeit North, South, East and West. They're failing. That needs to change.

No other country on the face of planet allows this type of "immigration", and there are very harsh penalties for violating the rules that govern coming into a state/country illegally. We should shut the borders down first, then talk about immigration reform and what we do with the folks already here.

My thoughts in no way are racially motivated as many will charge. I'm simply stating the obvious, pointing out the elephant in the room.

Simply one man's opinion and experience.


Drop me a note or leave your comments.
Jeff - Owner/Publisher - www.TexasOnlineRadio.com
Posted by Admin at 12:19 PM