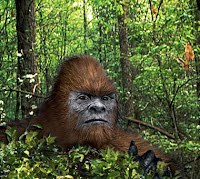 The movie maker who captivated the world with the Blair Witch Project is now on the hunt for Bigfoot.
Director Eduardo Sanchez has been hired by Haxan Films executives to create a new movie about the mythical forest monster.
The movie bearing the working title "Exists" will start shooting in Texas in October (11), according to Variety and will chronicle the exploits of a group of campers who are terrorised by a Bigfoot-type creature during a cabin vacation.
Sanchez hopes to turn the project into a trilogy, which will investigate all the legends surrounding the myth of Bigfoot.
....read the full article here in Variety.
--------------------------------------------------------------
post sponsor