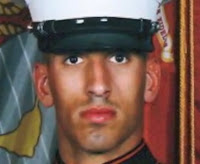 
Lance Corporal John Farias, the 20-year old Canyon High School graduate and United States Marine that lost his life during combat operations in Afghanistan. At 10a, July 6, 2011, a private jet carrying his body touched down at the New Braunfels Municipal Airport, returning his remains to his hometown. A motorcade left the airport and travel through downtown New Braunfels on its way to Zoeller Funeral Home. Local veterans and military support groups asked residents to line the streets of downtown in a show of support.

The motorcade route took the fallen Marine's body from the New Braunfels Airport on Hwy 46, underneath I-35 to Bus. 35, where it then headed to Seguin Street, around the Main Plaza, and onto Landa Street.