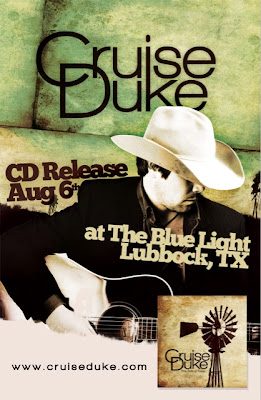 My name is Cruise Duke, I was named after my Great Grandfather Cruise Cloud Duke. I was raised on his family’s ranch in Lipscomb County Texas. The sound of the rolling Wolf Creek, Windmills turning, and the music from the Lipscomb Music platform somehow made for an interesting combination of influences for me growing up .
I first began singing at an early age, singing in church with my family. Although I  started writing early on, it would be later in my college career that I  would pick up a guitar.
During my first year at college, I studied a combination of Animal Science and Music.   You would most the time find me sitting around campfires and sing for my friends and gather up enough courage every once in a while to drive into Lubbock, Texas to sit on a stage to play music for locals and regulars at the small bars.
As the years past, I pushed forward with my music project by recording my first CD ” This Side of Texas”. The album that is set to be released in the summer of 2011 recorded by Jon Taylor at Mount Vernon Studios in Lubbock.
While in the production stages of the “Freshman Album”, I have continued to travel down the road to from the South Texas Hill Country area all the way up to Nebraska.
Making the miles down the road,  the band and  I have made a lot of friends along the way. Although “life on the road” can be very tough, the band always has a very upbeat attitude and are always very eager to get on the stage to perform for their faithful and loyal fans.
The band lives by the motto that, ” No matter what, we push forward”.
The band consists of:
Seth Lynch- Bass
Thomas Walker- Electric
Kelly Tucker-Drums
Cruise Duke-Acoustic
~~~~~~~~~~~~~~~~~~~~~~~~~~~~~~~~~~~
posted by Jeff ~ 8.4.2011

Get your Texas Online Radio tee shirts and gear here!!
Posted by Admin at 7:34 PM