Flux Capacitor plant to be built in Zorn, Texas - Green Jobs for America!!

Information was leaked by anonymous sources this morning who spoke under the cover of darkness, with a bag over their head, voice altering audio and one of those little black strips covering their eyes that a new government backed, Department of Energy funded program, will be building a five hundred million dollar facility to supply the world with flux capacitors.  It was said that it will create approximately 90,000 "green jobs" and helping pull the economy out of a rut.

"Bob" as he called himself, stated, "If they know I'm talking to you, I'll be "swimmin' wit da fishes". 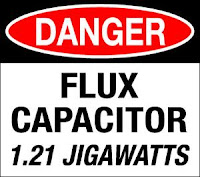 The flux capacitor, as most know, is the fusion based power source of the wildly popular DeLorean automobile made famous by the "Back to the Future" movies of the 1980's.  Once it was presented in the movie, the Department of Energy immediately put it into research and development, spending billions on it's possibilities for future energy needs.

Another source, from the DOE, again..speaking on condition of anonymity with a Richard Nixon Halloween mask on said, "After thirty years of research and development, we're ready to bring this new energy source to the world.  It will provide unlimited energy simply by putting the same garbage in you'd place in your home garbage disposal.  It's amazing! I think we've finally got the technology figured out."  He then ran away.

Paperwork has been filed to create a "Union Shop Only" zone for Zorn, and the new facility will provide all the most up to date, modern technology, along with a designated area for Union Workers to go at break time and on their lunch hour to eat, drink their beer and smoke pot before returning to work.  This is in their contract.

Zorn is a small area located between San Marcos and Seguin Texas with a population of -2.  The mayor doesn't even live there, and could not be reached for comment.  The plant will be built on prime farmland, right on the edge of the designated flood plain and has easy access to the IH 35 corridor running north and south, as well as the IH 10 artery running east and west.


Residents of the area, who are mostly farmers and ranchers are quoted as saying,
"What the hell are you talking about?  ...and the government wonders why we're pissed!"