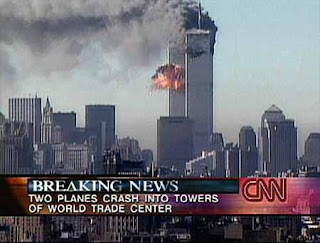 United States Air Force
Our folks at RAF Mildenhall put together a nice 9/11 tribute page. Please take a few moments to check it out and be sure to visit their facebook page and give them some feedback. Have a good evening! (KJT)

September 11, 2011 marks the ten year anniversary of the 9/11 attack on the United States. We honor those who died during the attacks, We also recognize the heroes who responded to the attack on the Pentagon in Arlington, VA, the World Trade Center in New York City, NY and the crash site of flight 93 located near Shanksville, PA.

My story starts off like most others...
It was a normal school morning and the day started as usual.  I got my son up and ready for school, it was uniform day, he's in his high school Air Force JR ROTC program.  He headed out for the bus, and his day underway.
I sat at the table going over plans for a project I was doing in San Antonio, drinking my morning coffee and had the television on for background.  I actually watched CNN back then.
They had a breaking story on about a plane that had hit one of the World Trade Center buildings in New York, but details were sketchy on what had actually happened.  The phone rings, it's Robert, the owner of the project in San Antonio.  We began talking about the project and we were both watching the news about the tower in New York at the same time.  The sound was down on the TV and I was pacing around the living room while talking on the phone.  "Yea, pretty wild a plane hit the tower huh?" I said.  Then.... it happened.
As I was in mid sentence the second plane hit the other tower.  We went silent.  "Did you f**kin' see that!!" we said almost in unison.  "Sorry man...gotta go." and I hung up the phone.  I turned up the TV and began to listen, know full well it was an attack.
I immediately called the school, and asked what they were doing, and they said they were on lock down.  They were also going to get the kids in the ROTC program out of uniform and into other clothing.  I then got in the truck and went straight to the bank, and was first in line at the door when they opened at nine.  I withdrew everything but a buck, just in case they hit the banking infrastructure.  I called my ex and let her know what I had done, and her and my daughter were welcome to come over if necessary.
I got back to the house and called my friend Brett, and got him out of bed...he works nights.  He hadn't heard what was going on, and immediately turned on the tube.  I watched throughout the morning, and as the towers fell, the phone rang once again.  It was Brett.  His only words were, "They're gone...nothing but blue sky.  I was just there last summer."
Almost in a state of shock, I watched the day develop in slow motion.  They were saying they were grounding planes immediately, New Braunfels is on the flight path to San Antonio so it's common to see and hear numerous planes all day long.  It got close to time for my son to get home... I walked outside.  It was an eerie quiet.  The crispest, clearest blue sky I'd ever seen.  Completely void of any air traffic. Birds weren't even flying as if they knew to stay grounded.  I went back in the house and continued to watch.  Calling my ex almost to the point of irritation checking on her and my daughter.
I heard the bus' brakes squeek, and as if on cue...the sound of my boys steps as he ran up the stairs, skipping every other one.  He hit the door, and I'd give anything if I could have taken that look off his face and the feeling in his eyes.... He knew life had changed forever, and so did I... all he said was, "What now Dad?"
I had no answer for him..... and it continues. Remind yourself of that day always.  We ARE America!
~~~~~~~~~~~~~~~~~~~~~~~~~~~~~~~~~~~~~~~~~~~~~~~~~~~~~~~~~~~~~~~~~~~~~
Posted by Admin at 9:18 AM