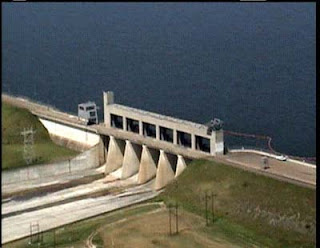 Members of the House Natural Resources Subcommittee on Water and Power held a hearing Thursday on H.R. 4719, a bill that would create a Southwest Border Region Water Task Force to monitor and assess the water supply needs of the area.

Rep. Tom McClintock, R-Calif., ranking member of the House subcommittee, told FoxNews.com that the situation needs immediate attention, particularly in light of reports that a Mexican drug cartel -- the Los Zetas -- unsuccessfully plotted to blow up the Falcon Dam along the Rio Grande last month.
"If the plot against Falcon Dam had succeeded, it would have affected more than 4 million residential customers," McClintock said Monday. "We need to focus our attention on securing these border water systems from attack by Mexican drug cartels, but also their use as a conduit for the illegal importation of drugs and people."

McClintock said he will seek to amend H.R. 4719 to alter its focus toward border security issues. As it currently stands, the legislation would establish a task force that would submit a report on the region's water supplies to Congress and would be comprised of representatives from the Department of Agriculture, the Army Corps of Engineers, the Southwest Border Regional Commission and others.
According to the Houston Chronicle, Mexican and U.S. authorities were "secretly scrambling" last month to thwart a plot by the Zeta cartel to blow up Falcon Dam and unleash billions of gallons of water.
The Zeta cartel planned the attack to get back at its rival, the Gulf cartel, which controls smuggling routes from the Falcon Dam to the Gulf of Mexico, Sigifredo Gonzalez, sheriff of Texas' Zapata County, told the newspaper.

Although the Gulf Cartel was the alleged target, about 4 million residents and massive amounts of agricultural land would have been affected in the resulting massive flood, the paper reported.
Sources told the Chronicle that U.S. officials learned of the plot through "serious and
reliable sources," the seizure of small amounts of dynamite near the dam and the discovery of an alert from the Zeta cartel warning Mexican residents to evacuate the area ahead of the blast.
The Mexican military then stepped up its presence in the area based in part on the U.S. intelligence, sources told the Chronicle.

McClintock said escalating violence along the Mexican border is a result of restricted access by U.S. Customs and Border Patrol agents to federal lands due to environmental regulations enforced by the Department of Interior.

"It certainly has the potential to be a serious security risk," McClintock said. "The plot by the Zeta drug cartel to blow up the Falcon Dam appeared to be quite credible. And as we have found over the years, before there is a successful attack, it is preceded by several unsuccessful attempts that clearly indicate intent. It would be utterly foolish to ignore."

The Department of Homeland Security did not immediately respond to requests for comment regarding last week's hearing.
Joan Neuhaus Schaan, fellow for homeland security and terrorism at the James A. Baker III Institute for Public Policy at Rice University, told the panel that the water flow and system of dams operated by the International Boundary & Water Commission (IBWC) are critically important to Texas agriculture along the Rio Grande.

"Water rights along the border have been the basis for contentious and sometimes violent disagreements for centuries, though for the last 60 years the IBWC has provided a framework for management," Schaan said in prepared remarks. "This critical water infrastructure, however, is vulnerable to attack."
Schaan also cited reports of the alleged plot targeting the 5-mile-long Falcon Dam.
"Destroying a dam requires access, means, knowledge and motivation," Schaan's testimony continued. "Organized crime in the region has demonstrated a facility for the first three elements. The question remains as to whether these same organizations might be motivated to carry out an attack. The scenario is not inconceivable."

A NEWSCHANNEL 5 investigation reveals what the feds don't want you to know. Suspected terrorists are hiding inside the U.S. and they got here by sneaking across the Mexican border.

What we've been reporting for more than a year has been confirmed by a government report just released. (Download the report.)

And a brand new interview by Pakistani investigative reporter Hamid Mir is bringing in more information.

Mir has interviewed some of America's most dangerous terrorist enemies. This time the Al Qaeda commander he talked to gave a grim warning that another attack on America is coming very soon.

"We can attack America anytime," says Abu Dawood during the interview. He also told the reporter that Muslims must leave America.

Mir says, "Abu Dawood told me, 'We are determined to attack America again and that attack will be bigger than 9/11."

The Al Qaeda commander says the attack will be led by Adnan El Shukrijumah. He goes by many aliases but is called Brother Adnan by his terrorist friends.

Brother Adnan is wanted by the feds for possible terrorist threats against the U.S. He's considered armed and dangerous

According to the Pakistani reporter, Dawood said Brother Adnan "had smuggled some dangerous materials from the Mexican border to inside the United States of America."

"It's the kind of scenario that worries everybody," says Fred Burton, a former special agent for the U.S. State Department.

Burton spent much of his federal career studying terrorists, predicting their next move. He now does the same thing at Stratfor, a private intelligence agency in Austin.

NEWSCHANNEL 5 asked Burton about the threat.

"I think it has to be viewed credible, until proven otherwise," he says.

The former special agent tells us the U.S. government is well aware Al Qaeda's been working hard to get a dirty bomb into the country, an explosive packed with nuclear materials small enough to carry in a suitcase.

Smugglers have been caught 300 times in the past four years trying to sneak in radioactive material, which could be used to make a dirty bomb.

But Burton says, "I think if Al Qaeda has a dirty bomb, we would have seen it by now." He says a chemical attack is more likely and the Valley could be a launching ground.

Burton says there are several specific locations in Houston, which if hit, could carry out a devastating terrorist attack on U.S. soil.

However Burton also says if Al Qaeda really does have a dirty bomb, border cities are much more vulnerable to attack, because he says terrorists don't want to get caught.

"You'd want to bring that in right across the border, and you'd want to detonate that as soon as you can," he explains.

We asked who would be at risk.

"You would look at cities such as El Paso or Brownsville," he replied.

Photo: Drug and human smuggling routes from Mexico into the United States. Approximately 90% of U.S. MS-13 members are foreign-born illegal aliens and depend upon the Texas-Mexico border smuggling corridor to support their criminal operations.

He testified to lawmakers in Washington about the dangers of terrorists and terrorist weapons getting smuggled in through South Texas.

The sheriff tells us his biggest fear is that something could go wrong with a bomb.

"We're not prepared," he says.

The possible dangers are also a concern to U.S. Congressman Solomon Ortiz. He was among the first in Washington to sound the alarm about dangers at the border.

Ortiz says, "The biggest threat is people coming in and we don't know who they are."

The government does know terror groups like Al Qaeda, Hamas, and Hezbollah are active in Latin America. In fact, members of Hezbolla are already inside the U.S., coming in through the Mexican border.

Colorado Congressman Tom Tancredo says there's even a training camp in Brazil teaching Middle Easterners how to blend in to the Mexican culture.

According to government intelligence, Middle Eastern aliens from countries known to harbor terrorists are smuggled to staging areas in places like Venezuela and the tri-border region between Brazil, Argentina and Paraguay. Then they're smuggled again through Mexico and our border right into the U.S.

There's a big payoff for those who sneak them in. Mexican illegals pay smugglers an average of $2,000. Middle Easterners pay as much as thirty times that amount, up to $60,000!

"I don't think they really care who they're bringing across, as long as they get paid for it," says Texas Congressman Michael McCaul. He put out the report, which also says Islamic terrorist groups may be using Mexico as a refuge.

During our investigation, we found out a lot of people from suspicious countries are crossing right here in South Texas. Since 9/11, literally hundreds of illegal aliens have been caught here from places like Iraq, Iran, Syria, Egypt and Pakistan.

Federal law enforcement estimates only ten to thirty percent of illegals who cross are actually caught.

Governor Rick Perry says, "To think that international terrorists have not already exploited our border is naive."