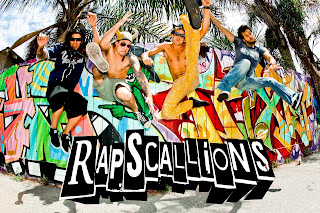 Several years ago, I met (online) music songstress Wendy Starland.  Since then I've watched her works and seen her discover talent such as Lady Ga Ga... saw she was an established painter/artist and created a terrific organization called "Give Back Entertainment" where she serves as Founder/CEO.  When Wendy is involved with a project, you know it's quality and you won't be disappointed with the final product. When I saw that Wendy was involved as the producer of the RapScallions, I had to take a look.  Nope, no disappointment here.  Hell, I'm fifty years old and love the sound, beats and attitude of this young, California based band.  I know you'll enjoy their work and you'll find yourself in sync with the lyric and beat.  Grab their new self titled CD which they just released on October 11... a great add to your party pack!!  Join the RapScallion Party Army and spread the word!!  These guys are going places!  ~Jeff/TOR 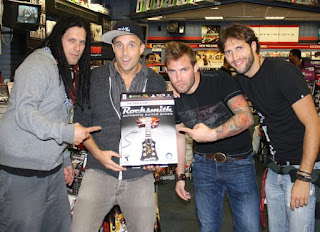 After performing to crowds of over 10,000 people, the RapScallions caught the attention of several major companies and are currently endorsed by D’Addario, Evans, Planet Waves, Warwick, Spaun and Etnies shoes. Teaming up with producer, Wendy Starland (Lady Gaga, Moby, Wu Tang Clan), the band recorded a 4 song demo at Interscope Studios. Before even finishing the mixes of the tracks, the RapScallions were offered an independentrecord deal. Recently they were also featured in Music Connection Magazine's Top 100 Bands of 2010 list. With endorsements, sales, and massive shows under their belt, The RapScallions have already achieved what most artists do only after receiving a healthy budget. This band possesses all of the elements of success,
maintaining both commercial appeal as well as a grassroots track record.