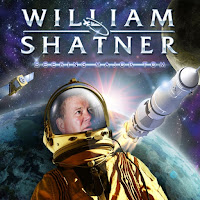 With a career that spans over 5 decades, Canadian-born actor William Shatner has become an instantly recognizable star of stage and screen whose vocal delivery, primarily in his performance as the square-jawed Capt. James T. Kirk , is...AS...iCONic...as it is...LEGENDARY. The versatile Shatner has also brought his unique interpretive talents to the music world as well, first in 1968 with the cult favorite The Transformed Man and later in 2004 with Has Been. Now Shatner has returned to familiar territory - space - in this wildly inventive concept album featuring brand new recordings of Shatner’s much celebrated speak-sing delivery on a host of classic rock favorites and other space-themed songs. With guest appearances by Sheryl Crow, Brad Paisley, Lyle Lovett, Steve Miller, Dave Davies, Peter Frampton, Ritchie Blackmore and Ian Paice, Johnny Winter, Carmine Appice and scores of other rock legends, Seeking Major Tom is sure to be one of the most talked about releases of 2011!