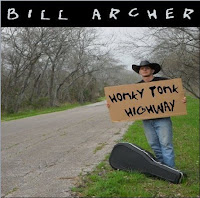 In 2009 Bill was nominated for Male Vocalist of the Year, Songwriter of the Year, Single of the Year "Cancun", and Video of the Year "Heroes" by the Texas Country Music Association. He humbly excepted the award for the 2009 Video of the Year for his song "Heroes" (a tribute to the men and women of the armed forces). In 2009 Bill's single Cancun received over 1 million plays on Myspace during the Myspace Records competition, where he was the #1 artist in the Country genre.  ...read more here!