Court Yard Hounds
featuring Martie Maguire and Emily Robison from the Dixie Chicks.
~~~~~~~~~~~~~~~~~~~~~~~~~~~~~~~~~~~~~~~
I always have been a big fan of these two ladies and the work they did with "The Chicks".  However, I feel they're off to bigger and better things as the duo "Court Yard Hounds".  Their sound is soothing and unique, a touch of Country and a dash of Bluegrass.  Can't beat it!!
I've put together a playlist of three videos below... Enjoy!  Jeff/TOR 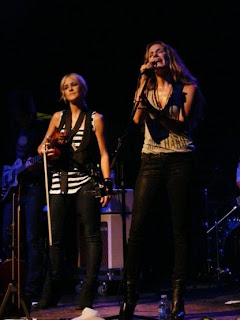 Strictly speaking, it’s only a few feet from stage left or stage right to the center spotlight. But it took Martie Maguire and Emily Robison a couple of decades to move those couple of yards. As the mainstays of the Dixie Chicks since they formed the group in 1989, the sisters have been familiar faces to many millions of fans, yet just a little mysterious in that familiarity, content as they were to cede the lead vocalist position and remain music’s most recognizable “sidewomen.” Chicks fans couldn’t help but hear those ever-present harmonies and wonder if Emily and Martie might ever come out from hiding in plain sight.


That’s just what they’ve done in their newly hatched incarnation as Court Yard Hounds, with a gorgeously assured debut album that has the siblings sounding like they’ve been fearless frontwomen all their lives. Is this band a side project? They can live with that label. Or something permanent? Yes, that, too. ...read more here.