"On the Horizon" - The Jobe Wilson Band ~ Anahuac, Texas - Podcast 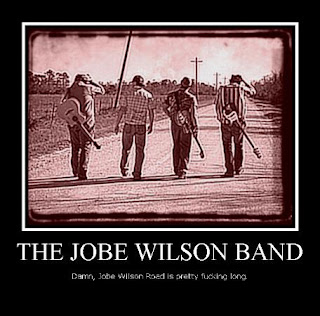 Let's travel out to East Texas for this "On The Horizon" band... I'm talkin' Anahuac, Texas.  A small town located between Houston and Winnie.  The band is named from a long stretch of East Texas road called Jobe Wilson Road...

I know the area well, did a lot of traveling after Hurricane Katrina out in that area, wish I'd known about the band back then, I'd definitely have stopped in to catch a show.  Great sound, great lyrics and I'll bet the stage presence of this band from Anahuac is surely a crowd pleaser.  Drop in to the band connection links below and keep up with "The Jobe Wilson Band", and pick up a copy of their latest CD.  ~Jeff/TOR

"Well you know, I think we all wanted to be in a country band," says Casey Royer the lead singer of the Houston based Southern rock group the Jobe Wilson Band which came together in the summer of 2010. "And honestly I believe there are slight traces of it in there still, its just not what came out when this line-up came together," which also consists of Kevin Choate(bass), Lee Nuckols(lead guitar), Ryan Dickson(lead guitar), and Anthony Comeaux(drums).