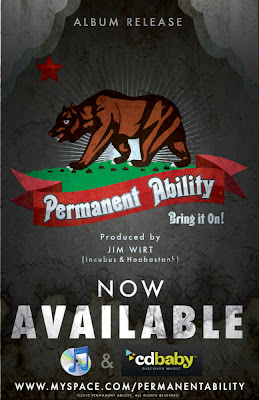 As you know, we're all about the music here at Texas Online Radio, and it's always a blast to open the ol' mailbag on Monday's and see what's there.

Over the last months, I've introduced to TOR visitors artists such as Joy Valencia; "Don't Wake the Lion", the Rapscallions and of course Wendy Starland.  The response has been tremendous!  Click on the links to view my posts.

Today, I have another California based band I'd like to introduce to you guys, Permanent Ability based in Los Angeles.

They're an electric, high powered band that would be right at home on any stage in Austin, Houston or Dallas!  I suggest you check out their music on the player below, and see what we can do to get Permanent Ability on a "whistle stop" through Texas in the near future.  For our fans out in California, be sure to check their site for tour dates and appearances, I'm sure it'll be a blast!  Looking forward to hearing more about these guys.  Drop by their site and pick up a copy of their latest... "Bring It On". ~Jeff/TOR 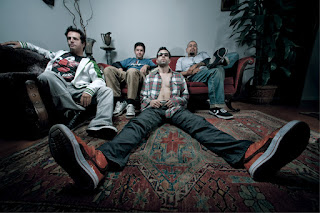 ...about the band.  From their website.
Permanent Ability maintains a media value that is incomparable to the dime-a-dozen cliché bands found in Los Angeles. Backed by legendary producer Jim Wirt, Permanent Ability's name is a testament to their capacity within the music industry.

The band was launched in 2008 by Brian Lanese. Brian is a three time Emmy Award Winner. His long list of accomplishments are sought after by many A-list celebrities. Lanese's bloodline notes a relation to Mark Twain and his writing mirrors that of his famous ancestor. Permanent Ability defines an unblemished sound that has quickly become a fan, and media, favorite!

The bands energy, sound, stage presence, and ever-growing fan base even caught the attention of George Clinton and Parliament Funkadelic bassist Lige Curry and Mario Pagliarulo of Serj Tankian. With their sophomore disc gartering industry notoriety, the bands collection of work is a tribute to their musical influences ranging from Led Zeppelin to LL Cool J.