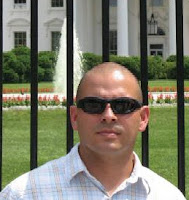 Support US Border Patrol Agent
Jesus Diaz
Doing your job shouldn't be a reason for going to prison.
The piece of shit that he busted got a visa, immunity
and a pass to Mexico to do it all again.
They say he lied about what happened...
Look at the "truths" coming out of Washington D.C. these days.
Just my opinion, I'll keep you posted.... Jeff/TOR
~~~~~~~~~~~~~~~~~~~~~~~~~~~~~~~~~
...from World Net Daily.
"It's amazing to think that the federal government and the Justice Department in particular, under your leadership, continued with a case against one of our nation's own Border Patrol officers that ended with an excessive two-year prison term for restraining a smuggler," U.S. Rep. Duncan Hunter wrote to Holder.
"The incident involving Agent [Jesus] Diaz would have been far better suited for an administrative decision on the part of his immediate superiors. It's certainly not worthy of such a disproportionate prison term," he continued. "After what happened with [Ignacio] Ramos and [Jose] Compean, and now with the details of Operation Fast and Furious coming to light, the case against Agent Diaz is troubling.
~~~~~~~~~~~~~~~~~~~~~~~~~~~~~~~~~