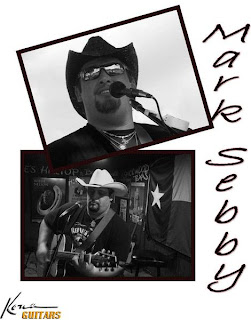 Texas Recording Artist Mark Sebby is storming the Texas Music Scene in 2011. His cutting edge sound, approach, and style of Country, Americana, and Texas Red Dirt Rock will leave you wanting even more! Heart felt lyrics based off of his life's experience, haunting vocals, and delivery of his music are what sets him apart from all the others.


He is currently performing Acoustic Shows and Full Band Shows with his new band Mark Sebby Band all over the state of Texas. Mark is one of the hardest working musicians in Central Texas. He has been known to perform 4 - 6days a week for 2 - 4 weeks at a time. “This is what I do and love! I would rather be out playing music every night than anything else! Come catch a show, you will not be let down!” said Sebby. He is an accomplished singer-songwriter and a mentor to many Artists just getting their start in performing.