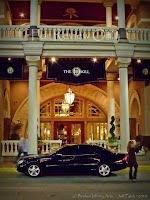 Driskill Hotel opens in Austin
On this day in 1886, the Driskill Hotel opened in Austin. The hotel was one of the grandest in Texas, the meeting place of legislators, lobbyists, and the social leaders of Austin, and was the site of inaugural balls, elaborate banquets, receptions, and university dances and ceremonies. In 1884 the cattleman Jesse Lincoln Driskill purchased the half block bordered by Sixth, Seventh, and Brazos streets. Jasper N. Preston and Sons of Austin designed the original cream-colored brick and limestone building. The skylit dining room was the most elegant restaurant in Austin for many years. The Driskill had additional dining rooms for ladies and children, a ladies' entrance on Seventh Street, and, for the men, a large billiard room, a bar, and a barbershop. The Driskill was also the headquarters for swarms of journalists and radio and TV reporters during the administration of Lyndon B. Johnson.
~~~~~~~~~~~~~~~~~~~~~~~~~~~~~~~~

Garrison at Goliad declares independence
On this day in 1835, the garrison at Goliad declared its independence from Mexico. The community of Goliad originated as one of the oldest Spanish colonial municipalities in the state, dating back to 1749. Nuestra Señora de Loreto Presidio, the fort at Goliad, supplied Spanish soldiers to the army of Bernardo de Gálvez during the American Revolution, garrisoned Spanish troops during the Mexican war of independence, and after 1812 saw four separate attempts to establish Texas independence. Goliad's role in the Texas Revolution began in October 1835 when Texans under Benjamin R. Milam and George Collinsworth captured the fort and its stores of arms and ammunition from the twenty-four-man Mexican garrison. On December 20 Goliad citizens and South Texas colonists met in the presidio chapel to sign a document known as the Goliad Declaration of Independence, written by Ira Ingram and the first such declaration for Texas, and afterwards hoisted the first flag of independence, designed by Capt. Philip Dimmitt, above the walls. The document had ninety-one signatures, the signers including José Miguel Aldrete and José María Jesús Carbajal, Texans of Mexican descent.
~~~~~~~~~~~~~~~~~~~~~~~~~~~~~~~~~~~~~~~


Duval County Democratic leader shot, opening door for Parr dynasty
On this day in 1907, Duval County tax assessor and Democratic leader John Cleary was killed by a shotgun blast while sitting in a San Diego restaurant. His assassin escaped as local lawmen were enjoying a fiesta, which they claimed had drowned out the sound of the shooting. Texas Rangers later arrested three men in connection with the assassination, but they were never convicted. Cleary's assassination came shortly after he had engineered a sweeping guarache triumph over the bota faction in the county elections, and opened the Duval County Democratic leadership to Archer Parr, thereby beginning perhaps the most remarkable and notorious political dynasty in Texas. Under the firm control of Archer Parr and his son George, the "Duke of Duval," the county gained a reputation for political corruption that peaked with Lyndon B. Johnson's election to the United States Senate in 1948, in which George Parr almost certainly directed the manipulation of returns that gave Johnson his eighty-seven-vote victory.
~~~~~~~~~~~~~~~~~~~~~~~~~~~~~~~~~~~~~~~


posted - 12.19.2011  -  The Texas State Historical Association
You can advertise or donate to Texas Online Radio by clicking here.
Help us keep spreading the word about Texas music, news and information! Thanks!
Posted by Admin at 8:33 AM