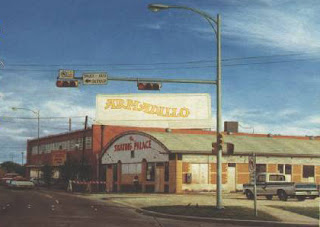 Armadillo World Headquarters closes its doors for good
On this day in 1980, Armadillo World Headquarters held a final New Year's blowout before closing its doors to await demolition. The celebrated Austin music venue was a concert hall in a converted National Guard armory in downtown Austin. It opened its doors in August 1970 and quickly became the focus for much of the city's musical life. AWH reflected the emergence nationwide of countercultural forms of music typical of its time. With a capacity of 1,500, the hall featured a varied fare of blues, rock, jazz, folk, and country music in an informal, open atmosphere. In 1980 the demands of the downtown real estate market brought an end to the Armadillo.
~~~~~~~~~~~~~~~~~~~~~~~~~~~~~~

Official Spanish census records 247 male and 167 female mulattoes
On this day in 1792, an official Spanish census recorded 247 male mulattoes, 167 female mulattoes, 15 male Negroes, and 19 female Negroes in a total population for Texas of 1,617 males and 1,375 females. Thus the black and mulatto population constituted 15 percent of the total population. Spanish law required free blacks to pay tribute, forbade them to carry firearms, and restricted their freedom of movement. In practice Spanish officials ignored such restrictions. After the Mexican War of Independence (1821), the Mexican government offered free blacks full rights of citizenship, but numerous free blacks fought for Texas independence--some fearing Anglo retribution if they did not serve, and others sharing Anglo beliefs about the Mexican government. However, the Congress of the Republic of Texas and, following annexation, the state legislature passed a series of increasingly repressive laws governing the lives of free blacks. The increased restrictions and the rise in white hostility resulted in a virtual halt to additional free black immigration to Texas. The United States census reported 397 free blacks in Texas in 1850 and 355 in 1860, though there may have been an equal number of free blacks not counted.
~~~~~~~~~~~~~~~~~~~~~~~~~~~~~~~~

Birder's paradise established
On this day in 1937, the Aransas National Wildlife Refuge was established. The refuge was sited on more than 47,000 acres on Blackjack Peninsula, located midway between Rockport and Port Lavaca on the Gulf Coast, purchased by the federal government with money raised by selling stamps of migratory birds. Later purchases increased the area of the refuge to more than 54,000 acres on the peninsula and more than 56,000 acres on Matagorda Island. Historically, Karankawa, Tonkawa, and other native groups wandered the saltwater marshes and coastal grasslands of the region. Legends abound that the pirate Jean Laffite buried treasure there. Today the most famous inhabitants of the refuge are the endangered whooping cranes, who with other migratory fowl winter at the refuge. Deer, javelina, alligators, and other animals are also inhabitants. Visitors can learn about the history and ecology of the region at the Wildlife Interpretive Center, and the refuge offers a car tour route, walking trails, a boardwalk, and tower for wildlife observation.
~~~~~~~~~~~~~~~~~~~~~~~~~~~~~

Bluebonnet Bowl wilts as old year fades
On this day in 1987, the last Bluebonnet Bowl game was played. This annual post-season football game was initiated in Houston in 1959 by a civic group appointed by the Houston Chamber of Commerce Athletics Committee. In short order, the group secured National Collegiate Athletic Association sanction, obtained Southwest Conference approval, and arranged for the use of Rice Stadium. The first game, on December 19, 1959, matched Clemson University against Texas Christian University. In the first eight years of the Bluebonnet Bowl's existence the television contract grew from $16,000 to the 1967 contract of $180,000. Proceeds were distributed to Harris County charitable organizations. Beginning in 1968 the game was played in the Astrodome, and the event was referred to as the Astro-Bluebonnet Bowl. Games were played at Rice Stadium in 1985 and 1986. Unable to continue after a drop in ticket sales and failure to attract a corporate sponsor, the Bluebonnet Bowl ceased after returning to the Astrodome for its 1987 game.
~~~~~~~~~~~~~~~~~~~~~~~~~~~~~~


posted - 12.31.2011  -  The Texas State Historical Association
You can advertise or donate to Texas Online Radio by clicking here.
Help us keep spreading the word about Texas music, news and information! Thanks!
Posted by Admin at 8:35 AM