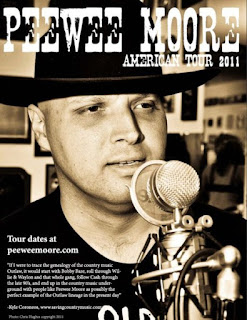 Since July 2007 Peewee Moore has honed a rigid reputation, and following playing over 200 shows a year in more than 100 U.S. Cities carrying the torch of 100% Independent Austin Texas Outlaw Country!

Peewee Moore is a self proclaimed Honkytonk/Outlaw Country Singer/Songwriter in the same vein as Waylon Jennings, Johnny Cash, Johnny Paycheck, and Hank Williams. He has been barnstorming around the country with his trio dubbed "Peewee Moore & The Awful Dreadful Snakes" doing an endless string of one night stands from Austin TX to you name it. If you havent caught a show it's your own fault!

Born and raised in the foothills of the appalachian rainforest just across the TN border in Fort Oglethorpe, GA, Peewee spent most of his time haunting the streets of Chattanooga TN playing many of his first shows in, and around the "Choo Choo" city. Peewee spent the consecutive years making a name for himself as an accomplished picker, and songwriter throughout the Southeast.... read more here.