With their lastest release, Moving On, The Casey Donahew Band are quickly becoming one of the hottest names in Texas Country, drawing fans at home and beyond. Capacity crowds are showing up this spring to see the Casey Donahew Band's dynamic live performances with over 1300 at the Grizzly Rose in Denver, CO and Tumbleweeds in Stillwater, OK recently hosted 3000 fans for CDB. Their first performance at the San Antonio Stock Show and Rodeo this February drew an impressive 10,800 fans into the AT&T Center. SOLD OUT shows in 2010 include Fort Worth's legendary Billy Bob's Texas with 5500 fans and 12000 at Lone Star Park in Grand Prairie, Texas. 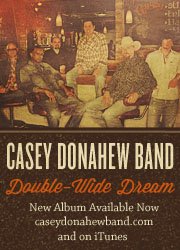