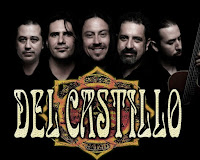 DEL CASTILLO has become a symbol of the cross-cultural power of music with their eclectic blend of Flamenco, Rock, Latin, Blues, and World music that is being referred to as “Nuevo Americano”. Between the release of their first CD back in 2001, to their 2006 release, DEL CASTILLO has received an astonishing 18 awards including SXSW/Austin Music “Album of the Year” Awards, “Band of the Year , ASCAP’S “Best Independent Group of the Year ”, and Austin Music Pundits “Best Live Act ”. Del Castillo has worked with Willie Nelson, Robert Rodriguez, Quentin Tarantino, and George Lopez to name just a few. Read the “ABOUT” section below for a COMPLETE bio and history of this amazing band.