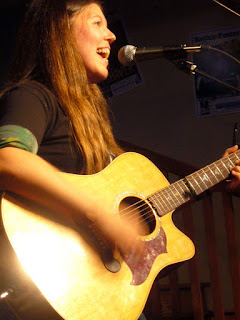 Jana Pochop (that “h” is still silent) is a singer-songwriter, blogger, traveler, and experiencer based in Austin, Texas. Jana grew up in New Mexico and sought out Austin after getting a history degree. Times were good then and she found a steady administrative job while cutting her teeth in the Austin scene, playing as much as she could all around Central Texas and opening for cool folks like Terri Hendrix and Susan Gibson. In 2009 she started working with Gibson as a hybrid booking agent/road manager/office assistant, and has traveled the country and learned nearly 50,000 useful things about the business of folk music from being in the van with a kick butt musician of Gibson’s stature....read more here.