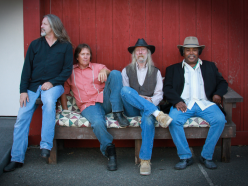 Guitarist Billy Alford’s new band Amongst Our Tribe formed when Billy traveled to Northern California from his native Texas to record at legendary Prairie Sun Studios.

He met drummer Rusty Chopps at a local gig. The two then approached Levi Lloyd (one of their favorite artists in the area), to sing and play guitar on the album. Mike Emerson was recruited for keyboards. Last to come on board was bassist/vocalist Tommy Miller (Gregg Allman and Friends).

Billy was immersed in the rock music scene in and around Dallas in the late ‘60’s and early ‘70’s. The artists that emerged from that era etched a significant page in rock and roll history. Billy left Texas, toured the United States playing bass, and moved to England during the “British Pop” invasion of the early 80’s. Session and movie soundtrack work after that, and Billy returned to Texas to pursue a career in formed metal art. Deep inside a fire burned, and he began to write and gave life to the songs that had been in his head for years. Amongst Our Tribe recorded 13 songs of these songs at Prairie Sun with producer/engineer Isha Erskine .