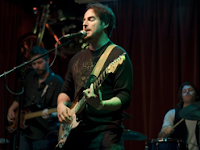 Jas Patrick is a singer, songwriter and musician based in Nashville, TN who is gaining recognition for his unique voice that often draws comparisons to Steve Winwood.

As an artist, Jas has a broad range of musical influences that appear in his recorded and live performances. His debut album, Working On My Soul, covers the grounds of rock, r&b, blues, jazz and folk.

At the age of four, Jas received his first drum set for his birthday. He immediately began teaching himself by playing along with the recordings of various bands. While in elementary school Jas’ father, also a musician, began touring nationally with a major country act and the family moved to Nashville; settling in the Springfield area north of downtown.

What Jas thought might be a six month project quickly grew to nearly three years. He worked evenings and weekends out of a home studio that he built with his father in a spare bedroom of his parent’s home. Jas not only wrote each song, but also wrote, played or sang nearly every part on his album. Jeff Peterson contributed steel guitar, lap steel and dobro and Jake Willemain provided most of the bass guitar tracks.

Jas Patrick's band performs regularly around the Nashville, TN area and is beginning to book in outside markets.
Posted by Admin at 12:14 PM