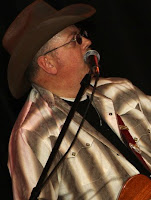 A Touring/Studio Musician & Producer/Engineer, Jeffrey was born in Arkansas City Kansas and raised on the plains of North-Central Oklahoma, in Newkirk. At an early age he and his family moved to St Louis, MO. After which he moved back to Oklahoma and started his professional music career in Norman OK. and later in Stillwater Ok, where he lived for 11 yrs. Both his parents were musicians, his father a jazz musician, theater actor and barbershop singer, and his mother a music teacher, pianist and organist.

Parker has been a performing musician and composer for 30 years. As a performer, he has traveled extensively throughout the United States and Canada with various road bands, playing all styles of music and sharing the stage and performing with acts such as Jefferson Starship, Alice Cooper, Buck Owens, Rodney Crowell, Johnny Paycheck, Baillie & the Boys, Ray Wylie Hubbard, Jerry Jeff Walker, Kevin Welch, Jimmie LaFave, Brewer & Shipley, The Great Divide, Cross Canadian Ragweed, and countless others. ...read more.